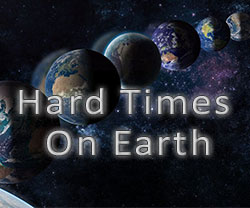 These are hard times for all people on Earth! In an effort to contribute to a greater understanding of how we may have a better future, here are some thoughts on the turmoil that has beset the entire world, and how we may learn from it and, eventually, achieve a state of peace for all.

The first step, I think, is to attain a better understanding of the violence that has plagued humanity for so many millennia. But we must look at this with a perspective of love and an overarching desire for lasting peace.

Violence must come to an end. The history of humanity contains far too many stories in which human beings practice violence against other human beings. In order for our future to be one of peace, reconciliation and harmony, we must understand the root causes of violence. As I see it, here are some of the main triggers:

PREJUDICE - When someone carries thoughts that say " I don't like you because you are different" and teaches children the same, we have a recipe for potential violence. Furthermore, prejudice leads to discrimination — which has all-too-often become institutionalized. These problems are about race, religion, culture, sexual orientation, social status, economic status, level of education, or even simple differences in thought. Focussing on any one of these reveals an ignorance of our common brotherhood/sisterhood as eternal children of God.

BELIEF IN SUPERIORITY - When someone carries thoughts that say, “I don’t like you because I am better than you” and teaches children the same — that he or she is “better” than someone else because of race, religion, culture, sexual orientation, social status, economic status, level of education, or simple differences in thought, then we have a recipe for potential violence.

DESIRE TO OPPRESS - When someone has a desire to oppress others — because of his or her prejudice, illusion of superiority, and the desire to abuse the lives of others because of such false beliefs — then we have a recipe for potential violence.

SELF-WORSHIPPING COMPLEX - When someone has a desire to be worshipped above all others and has no regard for the welfare of those who do not worship him or her — whether in politics, religion or any other area of responsibility — then we have a recipe for potential violence.

GREED - When someone has become addicted to acquiring more and more regardless of the consequences to the welfare of others, we have a recipe for potential violence.

SILENCE IN THE FACE OF WRONGDOING - When someone chooses to say or do nothing when evil practices in society are going on, especially when one is in position of power or influence, then he or she contributes to a recipe for potential violence.

And finally, violence itself tends to beget violence, and the downward spiraling of those human beings who choose only to react and not to help elevate the spirit of the world. We can always protest against injustice, but let protest peacefully — as Mahatma Gandhi, Martin Luther King, Jr. and other spiritual leaders have shown us.

In the background of all of this is a psychological fear of learning to grow beyond one's upbringing, as well as the general mentality surrounding us as we make our way in life. After all, not a single one of these tendencies has anything whatsoever to do with our fundamental nature; all too often, we have been victims of false education -- from parents, schools, religious institutions, and the particular societies in which we have grown up.

So let us rise above everything we think we know and embrace the fundamental unity that is our birthright as eternal children of God -- regardless of the situations in which we find ourselves during our current lifetimes on Earth. It is our obligation to follow the truth, which does not always come from those sources we may have once admired. Let us — above all — listen to our conscience, which is our constant link to God.

May God bless us all, now and forever!